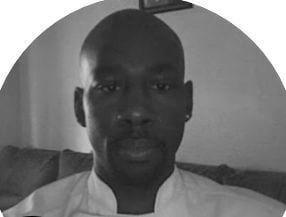 During his apprenticeship he worked as a commis chef for a famous french perfume maker (guerlain), and at the same time he worked in a very popular steakhouse in Montparnasse which is where some of his first food memories began.

After his graduation he went on working in different places such as; Palace (Meurice), Brasseries ( l Auberge d Hab). After four years of culinary experiences within France, Boubakar decided to expand and learn more about the art of cooking so he decided to go England (London). During his time in England he worked under a renowned French chef (Franck Raymond) in the first opened French restaurant (Mon Plaisir).

During his time at Mon Plaisir he developed his skills and made his way up to junior sous chef. Following two years with Franck Raymond, Boubakar moved to Birmingham (Shatterford) where he collaborated with one of the greatest French chefs: Dominique at (The Bellman’s Cross Inn) as a pastry chef and in time ended up being in charge of a new venue owned by Dominique in Alveley.

Moving back to London he worked at ( l Etranger Restaurant) where he learnt about fusion cuisine; combining European and Asian ingredients. Although Bouba enjoyed this experience he decided that he wanted to travel further.

After being selected by the (C Restaurant) to come to Australia (Perth), Bouba saw this as a chance to travel and expand his resume. During his time in Australia Bouba has also worked at the (Villa d Este) in West Perth, the (Windsor Hotel) in South Perth and (Ultimo Catering) in Osborne Park which has allowed him to see the many aspects of the culinary industry in Australia.

Bouba is confident in making every type of food, even if he has a partiality when it’s come to French cuisine.

His philosophy as a chef is about hard work, team spirit, developing your skills and enjoying your time in the kitchen.