Mattia is a Chef with great culinary abilities and creativity; he has experience and a great passion for the culinary arts, which he cultivated over the years working at various restaurants.

His first kitchen experience was with Il Peccato Originale, a small but well known fish restaurant in Rome where he worked for two years side by side two young talented Chefs. He then worked at L’Osteria dell’Orologio, a restaurant in the heart of Fiumicino, Italy, for two years. After that he worked at the artisanal bistro Settembrini in the center of Rome, under Chef Luigi Nastri. There he was given creative freedom to create and execute his own recipes.

After those experiences in his own country, he felt the need of expanding his horizons, Mattia decided to start traveling around the world and his first stop was at Atelier de Joel Robuchon in London as a Demi Chef. This 2-star Michelin restaurant provided him with a creative, exciting, and high stress atmosphere in which he was able to exercise his skills. He was primarily responsible for cooking meat.

After a call from Chef Cristina Bowerman, (one star Michelin restaurant in the heart of Trastevere) he decided to come back to Rome to work, he spent one year at Glass Hostaria as Sous Chef, he increasde his knowledge on molecular cooking and decided then to elaborate on it.

He moved to Sydney to challenge once again his ability to adapt, and over there started to collaborate with Chef Victor Moya and Chef Alessandro Pavoni at Ormeggio at the spit, two hatted restaurant with an innovative Spanish/Italian kitchen. He worked at Ormeggio for two years, earning the trust of his colleagues and bosses, he was offered then to became Head Chef of the sister restaurant (Chiosco by Ormeggio) a more casual, but still refined venue situated a few steps from Ormeggio.

After leading Chiosco for one an a half years Chef Alessandro Pavoni offered to Mattia the chance of opening a restaurant as co-owner and Head Chef. The new venue was called Sottosopra and has been awarded with one hat from the Good Food Guide after just 4 months from the opening, with Mattia as Head Chef the restaurant experienced one an a half years of success, culminated with the confirmation of the hat from the guide.
During this time the crew participated on the tv program THE CHEFS LINE, giving them even more recognition.

Subsequently the birth of his first son, Mattia decided to go back to Rome to fully embrace his newborn, never stopping his will to learn and improve.

Mattia is already highly skilled, but he continues to learn and can do so quickly. He is very creative and is curious to discover new combinations and techniques. He works very well under pressure.

Thanks to the collaboration with so many different Chefs, Mattia has also had the opportunity to learn foreign cooking skills such as Spanish, Japanese, Thailandese and Middle East. 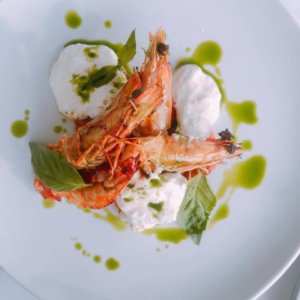 Mattia was an exceptional chef. He and his wait staff did a great job at our private event.