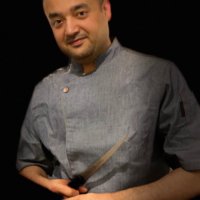 From earning a Bachelor’s degree in culinary education and then completing a masters in hospitality, he has spent the good part of the last 2 decades working with some incredible people, chefs of repute and passionate hotel owners. Mukul has trained with Chefs from Nobu, trained at Taillevent (2 Michelin) under chef Alain Solivérès, Le Duc Paris and at Chef Joël Robuchon’s restaurant (2 Michelin) at Metropole Monaco.  He hasalso trained in the California Sushi School.

As an astute food and beverage operator, he has been involved in the pre-opening planning and opening of 2 royal palaces, Ritz Carlton Riyadh, Taj Bangalore, 2 luxury yachts. He started his Australian journey as the Director of Food and Beverage of Shangri-La Hotel Sydney, running Altitude, co-creating high tea at BluBar etc. He has also run operations for The Westin Hotels, Pier One Sydney as the Director of operations.

Mukul is versatile, enjoys the challenges of modern cuisine and working in the kitchen to satisfy people with mutual admiration for fine cuisine. He is here to deliver food, beverages and create events that would bring happiness for all involved.