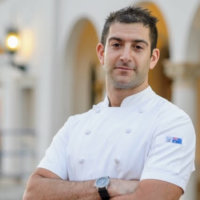 Born and raised in Sydney in a Jewish household, this allowed Mark great exposure to a vast array of food at a young age. Amongst them were smoked tongue and traditional chicken liver which are still favourites. But that is not all! Mark’s dad had quite the appetite. BBQ duck and smoked eel can still be recalled when he was 7.

Early cooking at home for fun was scrambled eggs, soft and creamy  with margarine but he got adventurous around the age of 13 when curiosity got the better of him and he was using the Woman’s Day publication to cook roast duck with orange sauce as well as prawn bisque; he still recalls the build up of prawn heads in the freezer and setting the stove alight in excitement with brandy!!

Mark started his culinary career at Bistro Moncur Woollahra under the much-respected Chef Damien Pignolet. There Classic French technique was continually refined. This was followed by the Park Hyatt Sydney.

London was calling in 2003 and he was involved in the opening of the acclaimed St John Bread and Wine, this was followed by other highly notable Michelin Starred establishments for the next 8 years.

Whilst working as Head Chef at Paramount restaurant in London, he received an offer to be Consultant Chef de Cuisine at Grand Hotel Europe St Petersburg in Russia. Here he had the privilege to cook for Consulates and Heads of State for L’ Europe Dining Room.

Before leaving the Northern Hemisphere, Mark was keen to gain exposure to North and South American Cuisine and as such Mark worked as Senior Sous Chef for the prestigious Chiltern Firehouse under Nuno Mendes.

Mark returned to Sydney in 2015 with his family. Working at the notable  Four in Hand before its sad closure and has since held positions of both Head Chef and Executive Chef positions most recently Executive Sous Chef of Felix restaurant

Mark Kay
The wine tasting was very good. Bella was excellent. Chef Mark and staff were wonderful and the food and service fantastic.

Mark Kay
I wanted to say thank you so much for your contribution to a very special night. Food was divine and the evening memorable. I will be recommending you to everyone! Thanks again.

Mark Kay
It was AMAZING!!! Mark was fantastic, food was beautiful!! No complaints what’s so ever, also the two waiters we had made our night!!!! One was Lauren and I can’t remember the other young girls name, they were fantastic on another level!! I can’t thank them enough, they were on the ball from start to end, so friendly and extremely attentive and such warm and caring energy. Thank u so much for everything

Mark Kay
Thanks for everything - lot of fun, big success. Cheers Alan