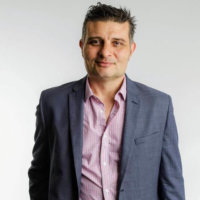 In the past year Eddie has been the Head Chef of The Hotel Shamrock, and achieved an honourable mention in the latest Good Food Guide for his work at The Victorian Wine Room, which was voted best country restaurant.

He has taken his style of cuisine from London to the Yarra Valley. This award-winning chef has a passion to produce significant dishes using the best and finest produce from around the regions of Victoria, so it’s no wonder he is known as “The Regional Produce Chef”.

Eddie’s credentials include “Best Winery Restaurant in the Yarra Valley” in 2007 for his work at Tokar Estate, and a Michelin Star at Rhodes in the Square with Gary Rhodes in London.

Furthermore, he holds cooking classes and demonstrations at events such as the Royal Melbourne Show and the Bendigo Farmers Market, and is an ambassador for many regional products and produce. Eddie has appeared on Nine Network’s national TV show “Fresh with Jason Roberts” in 2003 and on monthly radio programs on 3AK in Melbourne with Sandy Kay and Easy mix 98.3FM in Bendigo.

As he always says, “Life is too short so enjoy great food and wine!” We are pleased to have him as a Personal Chef.

Eddie Basich
A surprise 40th birthday dinner for my husband by Chef Eddie was the perfect gift and experience. He made us feel comfortable by chatting with us but also allowing us to dine privately too. Amazing food for my big foodie of a husband and cleaned up everything so we got to relax and enjoy our wine. And a special mention to our newborn baby boy who slept and let us have a fine dining experience. So so good and have recommended it to so many people already.

Eddie Basich
The canapés bases were a little dry.. Tasted good. The main was excellent as was the desert. The assistant/waiter could have helped pour the drinks/wine more. Overall was a great night.

Eddie Basich
Eddie provided a fantastic service. He worked around our requirements and delivered delicious food with a lovely attitude. Was a pleasure having him cook for our staff.

Eddie Basich
Eddie was fabulous. The food was delicious and more importantly he was very comfortable in our home. Easy going and approachable.

Eddie Basich
Eddie was great. Very particular about quality and presentation of the food. He was quiet when required and was very happy to engage in discussion when we had questions for him. Food great and left the kitchen very clean.